Choosing the right bi-fold for your house is essential, both practically and stylistically, and they could quite quickly become the wow-factor design feature that you have been looking for.

To make sure you make the right decision, follow our guide to choosing the perfect glazed doors for your project. Bi-folding units can open inwards or outwards, and most people choose the latter option to maximise space inside. Durable, low-maintenance and robust enough to allow very minimal frame dimensions, aluminium is the most suited to bi-fold and sliding doors, and can be finished in a wide range of colours using a low-maintenance powder-coating process – see our guide to metal doors and windows for more info.

Bifold doors open up the home to the great outdoors and are ideal for filling interior areas with natural light; there’s no question as to why they are the cherry on top of many self-build, extension and renovation projects — made of multiple leaves or panels, bi-folding (or folding sliding doors) open by folding against each other like a concertina. Bear in mind that for bi-fold doors, the frame material and its dimensions will influence the cost. As a rule, uPVC offers the least expensive option and aluminium the most.

Elite Builders London offer the best aluminium bi-fold doors and are an incredible investment with many great benefits to speak of. 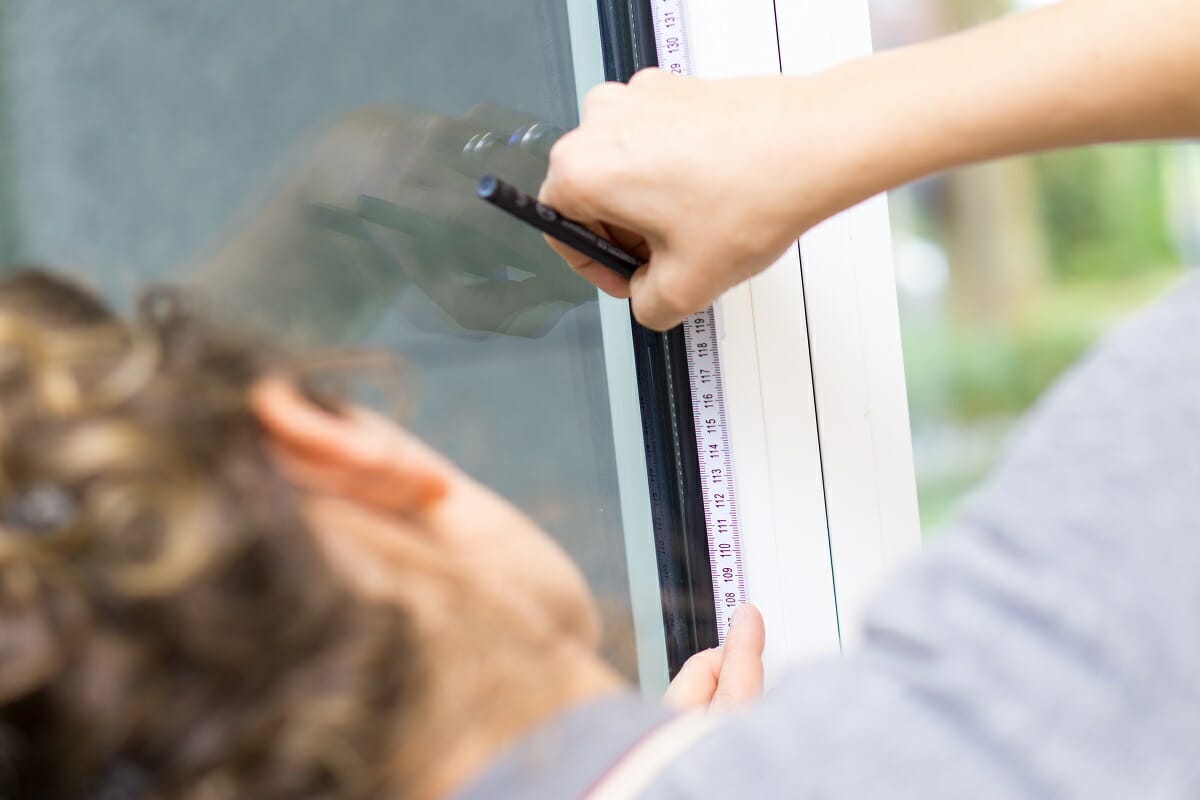 Durable, low-maintenance and robust enough to allow very minimal frame dimensions, aluminium is the most suited to bi-fold and sliding doors and can be finished in a wide range of colours using a low-maintenance powder-coating process.

Aluminium bifold doors are a fantastic choice for both new buildings and replacement glazing. The aluminium system provides a simple yet effective solution for door openings that boast high levels of thermal performance paired with modern design.

While a composite door is a more advanced option, many people still choose to have a uPVC door installed. However, if you can afford to pay a little more, we would always recommend choosing a composite door instead as they are more secure, thermally efficient and durable than uPVC doors.

Composite doors will also often be more readily available in a timber-like finish and spending a little extra might be what you want to do to achieve a more aesthetically pleasing finish to your home.

A composite door is a single leaf door that can be solid or with glass and is usually filled with high-density foam. In the United Kingdom, it is common for composite doors to be certified to BS PAS and be compliant with Secured by Design, an official UK police initiative.

A beautiful and classic option for those creating a traditional-style home or looking to install in a period property, wooden doors come in various finishes.

Our high-performance, timber bi-folding doors are available in a range of configurations up to 8 metres in length including complicated bowed track and right-angled layouts. The weight of the doors is carried by the bottom rolling system, eliminating the need for overhead structural beams. 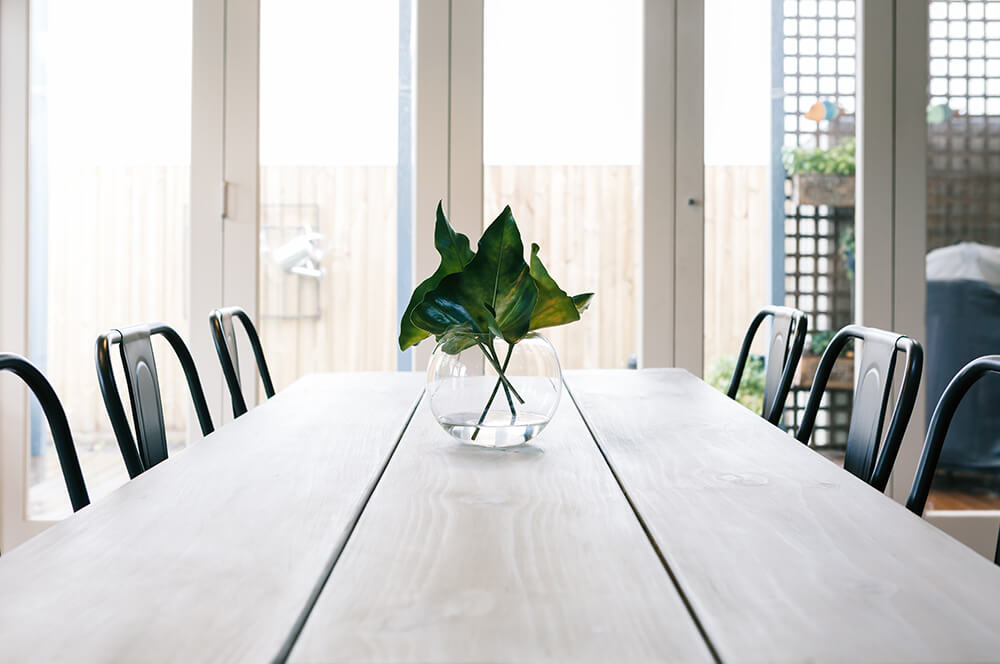 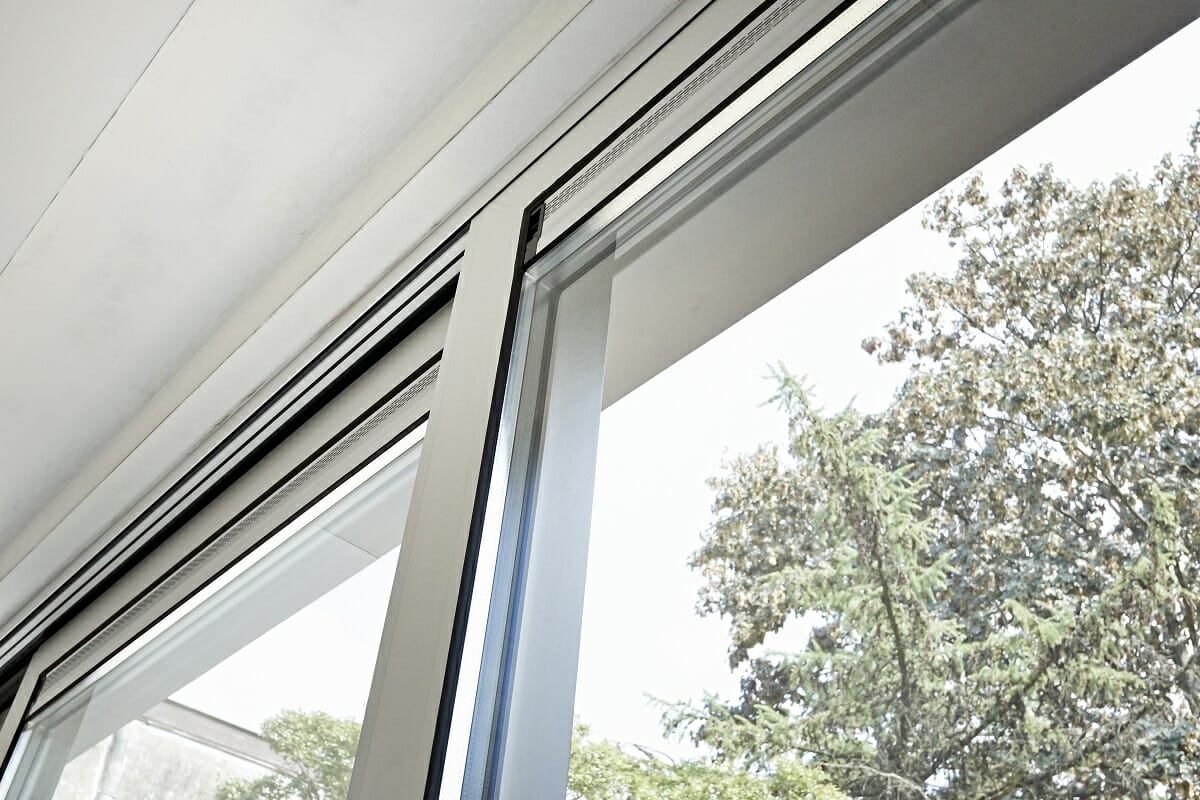 Always thought of as the cheap and cheerful option of windows and doors, PVCu (also written as uPVC) are low maintenance but don’t come with the slim sightlines and quality of finish as timber or aluminium.

uPVC is still the best budget-friendly choice, now available in black or dark grey finishes. But uPVC isn’t as durable as aluminium or wood, so the frames will be thicker to enable them to achieve the desired strength – or possibly reinforced with galvanised steel, like this.

As a significant access point into your home, bi-folds must conform to current security standards and the lead door must have a multi-point locking system. For extra peace of mind, invest in a lock featuring an anti-pick/drill cylinder that conforms to Police’ Preferred by Design’ security standards. If you have small children, request finger-safe gaskets to prevent doors slamming shut on tiny hands.

A multi-point locking system is just how it sounds; when the lock is engaged several bolts with a widened head, not unlike the head of a screw, or slightly hooked shape flip out of the door and slide into grooves on the door frame. This means, unlike older designs for doors that had only one locking point, you now have upwards of ten, all sunk into the internal framework of your door making it extremely hard for a thief to break into your home via forceful entry. 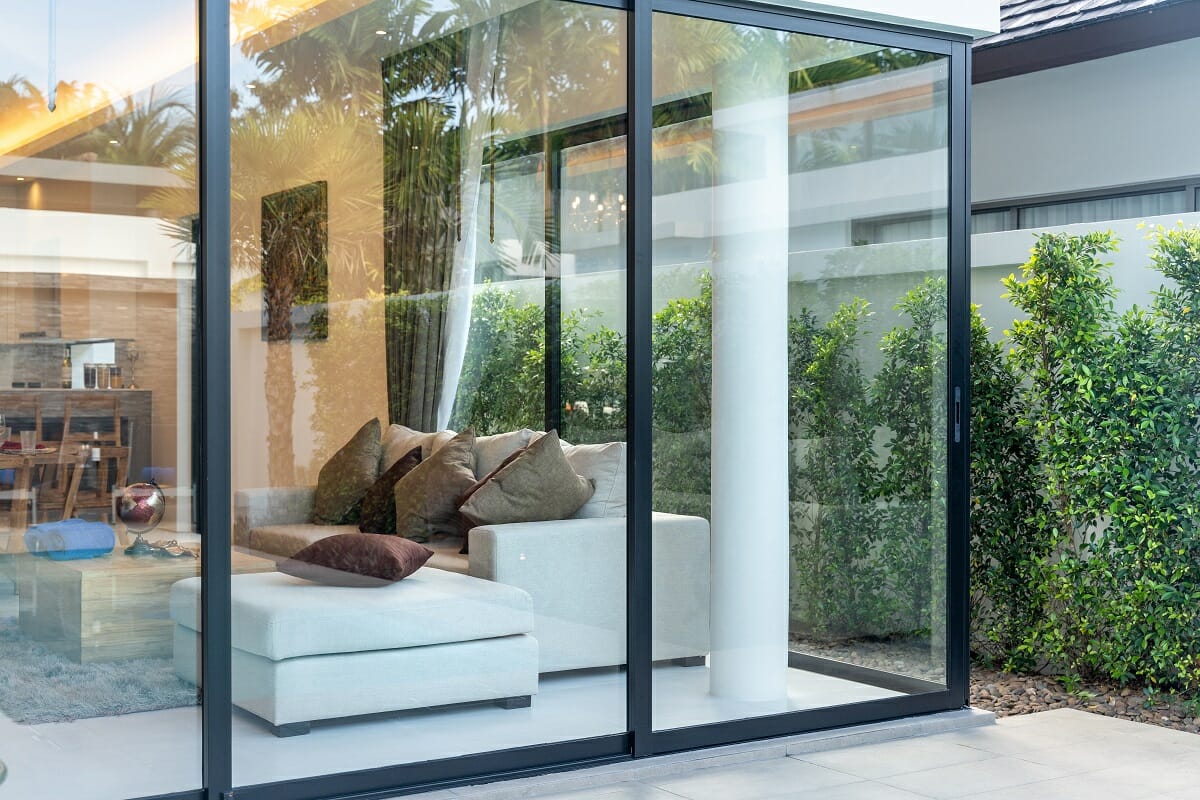 Modern glazed doors, whether they be bi-fold doors or sliding doors, are one of the most sought-after features in today’s homes. Equally, they are one of the main additions people use to maximise natural light in the home when undertaking an extension or renovation. 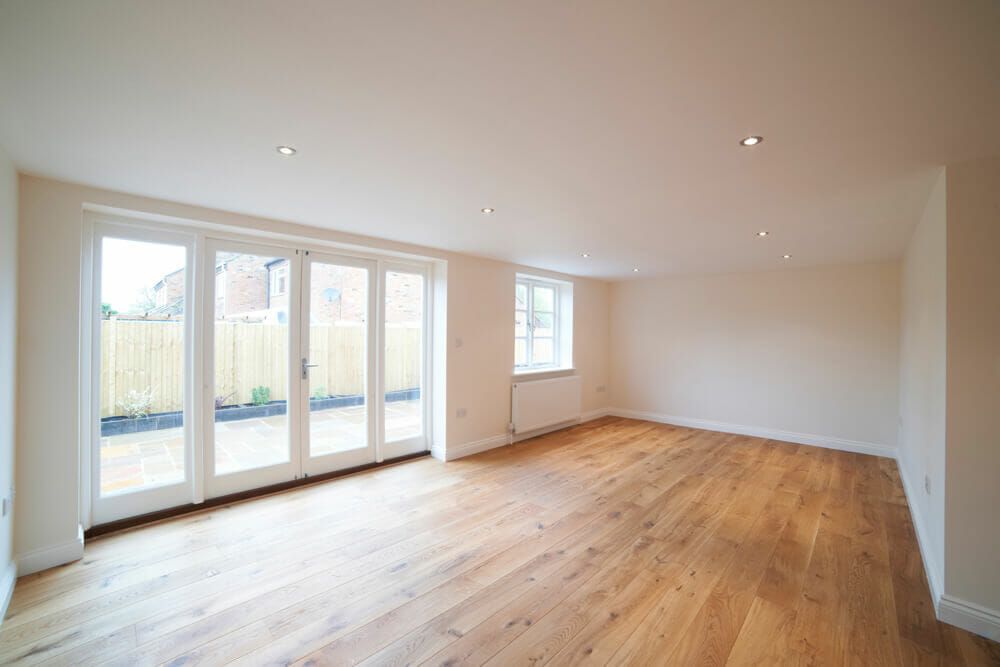 Double glazing is now the industry standard offering both good heat insulation for inside your home while keeping the cold in on those long, wintery nights. The way this is achieved is by placing two panes of glass together with a vacuum in between both to slow down the escape of heat significantly out and cold in.

To combat the loss of heat from your home, you can get triple glazing as well, which further insulates your home but keep in mind this does incur a significant extra cost.

Due to the nature of double and triple glazing, your home will become more energy efficient over single pane options. As less heat is escaping from your home, this means your central heating won’t need to be on as much, which means much less money being spent on your heating bills.

One of the great things about bi-fold doors is that they have incredibly low upkeep costs. Keeping them clean like any window is a must for obvious aesthetic reasons. The best piece of advice Elite Builders can give you once your brand new bi-fold doors are installed would be to keep debris out of the running at the bottom of the frame as this can make closing the door tricky.

Silicon spray, as much as it used in the food industry, is what is known as a ‘dry lubricant’. If you have plastic runners and the rail is clear of debris then pray some silicon spray along the whole gap, and your door should get working again. If this is not the case, however, then please give us a call as there might be a problem with the internal mechanism and require expert advice.

Elite Builders London provides the best Bi-Fold Doors service throughout London.
In addition to the expert services provided by Elite Builders London, our Builders are based in London and they offer services such as windows, extentions, commercial construction, basements, ground works, loft conversions, refurbishments, and specialist constuction.
Here at Elite Builders London, we provide popular services that includes roofing, residential construction, and structural works.
The Capital City of London is situated in Greater London in the UK.
The popularity of London can be attributed to the numerous canals and drainage systems it has such as River Thames, Kensington Canal, and London River Services.
London local council is a Devolution In The United Kingdom that supplies local services within the region.
Our Builders at Elite Builders London is based in London, Greater London.
London is one of the numerous county regions that include Elmers End, Tottenham, Beckton, Highams Park, and Feltham.
The Bi-Fold Doors service regions of Elite Builders London's Builders include government regions in London like Teddington, Brentford, Barnes, and Kew.
Capital City's such as London are split up into government regions that include Chelsea (UK Parliament constituency), Westminster Abbey (UK Parliament constituency), Paddington North (UK Parliament constituency), Battersea (UK Parliament constituency), and Kensington and Chelsea (UK Parliament constituency).
The Capital City of London and the nearby regions including Harefield, and Arkley are part of the Bi-Fold Doors service area of Elite Builders London's Builders.
Elite Builders London's welcoming Builders provide services throughout London including Bushey Mead, Barnes, Harold Wood, Brondesbury Park, Chislehurst, Lambeth, and Finchley.
Situated in the Capital City of London, Elite Builders London's Bi-Fold Doors also extends to Thamesmead, Raynes Park, Morden Park, Bowes Park, and Shoreditch.
The services provided by Elite Builders London are available across London in England including Ilford, Hounslow, Hackney Central, Ealing, and Waterloo.
Elite Builders London covers the outer regions of London that include Rotherhithe, Islington, Alperton, Bromley, and Brunswick Park.
Situated within London, Elite Builders London also offers Bi-Fold Doors service to regions such as Isle of Dogs, Edmonton, Tokyngton, Seven Sisters, and Clapham.
The regions part of Neasden, Dulwich, Purley, Hoxton, and Woodford are part of the areas of London in Greater London.
Other regions within London are Pimlico, Anerley, Sidcup, Chelsea Harbour, and Holloway which are situated closely.
Including the Capital City of London, regions such as Kingston upon Thames, Chipping Barnet, Uxbridge, St Mary Cray, and Croydon are located here.
Some of the well known educational centres in the UK include Institute of Cancer Research, and Lister Institute of Preventive Medicine which are located in London.
There are numerous standard schools such as London Oratory School, and Thames Christian School in London.
Carlyle's House, and Saatchi Gallery provides people in need of help and advice regarding the history of London.
Morden Park, Vauxhall Gardens, and Holland Park are situated within in and around London and afford the opportunity for to relax and breathe fresh air.
Interconnecting road systems within the region of London include Elephant and Castle, Tulse Hill, and Swiss Cottage.
Statue of Charles II, Royal Hospital Chelsea is situated within London.
Historic buildings such as Carlyle Square, Swan House, Enfield Island Village, 66 Old Church Street, and Sloane Avenue Mansions are found in London.
Canary Wharf are notable as London's main business centres.
A number of companies including Southern Housing Group, Rockstar London, and J Gurney Nutting & Co in the Capital City of London.
London's shopping centers are famous and people flock to River Island
Free No Obligation Quote